My First Ride reviews for Kawasaki Motors Malaysia Sdn Bhd’s (KMSB) Z650 and Ninja 650 got off to a very wet flag-off period. In fact, there was no customary flag-off segment, unlike the morning session, which had the ceremony performed. I was slotted for the afternoon session, which has a higher chance of riding in the wet, as has been the occurrence the past 1 week in Klang Valley particularly in Kuala Lumpur, Petaling Jaya, Shah Alam and Klang areas.

Of course, even the surrounding states got affected too, like Negeri Sembilan and parts of south-west Pahang, since both are bordering the state of Selangor, where the aforementioned cities are located. Still, the wet weather won’t dampen my confidence in trying both Kawasaki motorcycles as I had came prepared for a thunderstorm-type of riding – 100% weather-resistant riding jacket, with Dunlop’s D214 dry/wet rubbers being default tyres of the bikes. 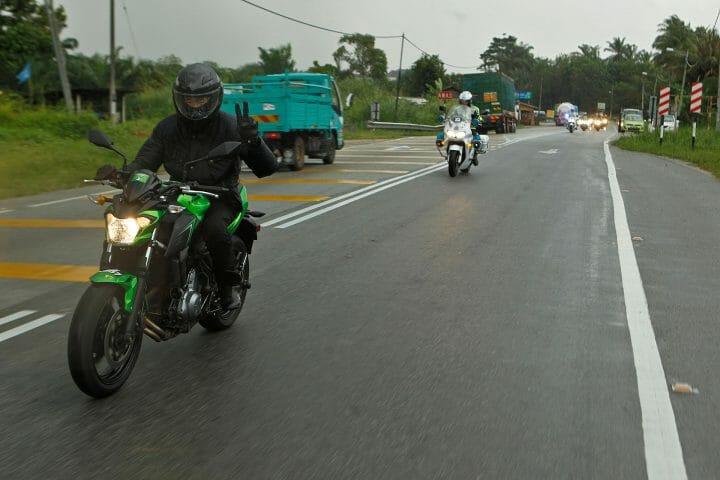 The tyres provide the necessary grip needed to navigate bends on dry and wet surfaces so riding is the same for me, regardless of the weather condition. However, that’s not the case for the rest of the convoy as within the opening minutes since we left Nilai Springs Resort, I had built quite a gap at the front, with only the escorting traffic police (front and back) as companions (photo above).

The rest of the media convoy could only closed the gap after the leading police escort was instructed to slow the pace (via bike intercom) to enable them to catch up. Normally, the speed of the leading escort is subjected to how fast the nearest rider is able to keep up, and I happened to be there all along since we left the starting point. The overall pace increased once we rode past Sungai Pelek town as the routes thereafter are mostly straights with occasional bends in-between – not much effort is needed to sample the handling characteristics of both bikes in general. 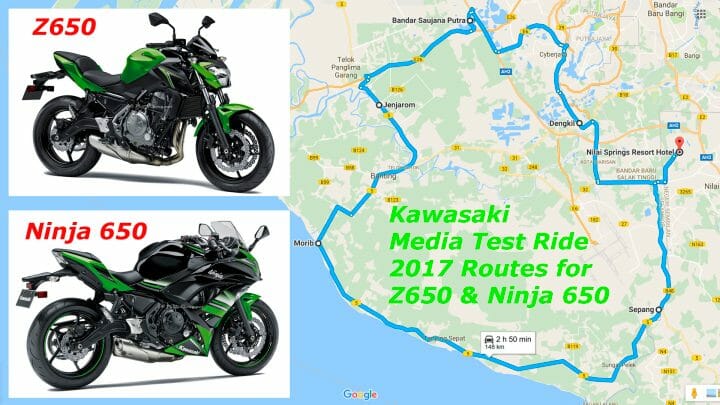 Bike swapping was done after our revised, first scheduled stop – the original stop for a group photo with the bikes was supposed to be at Bandar Enstek not far from our starting point but heavy drizzle put paid to that idea. The morning session group managed to have the photo session at that area due to the better weather. Nevertheless, the revised stop at Dataran Morib (Morib Square) was the second stop for the morning session group.

I started off with the Z650, and swapped it for the Ninja 650. Once the convoy had resumed, the order of the day was still the same – me as the leading rider (photo below). Took me just a few minutes to get up front as usual, it wasn’t a need to be at the front but each of us is allowed to ride the bikes at the pace we are comfortable with, and the non-braking/non-slowing down style at the bends permitted me to do just that. 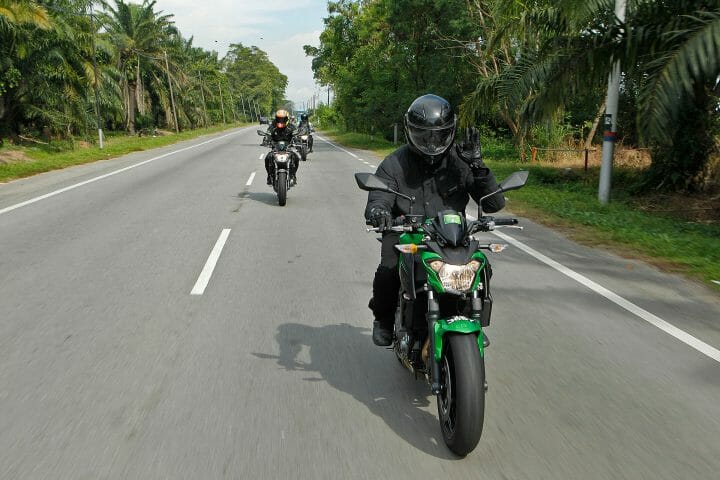