Seventeen down, one to go. Jonathan Rea of KRT (Kawasaki Racing Team) has won the first race of the Pirelli Qatar Round and matched Doug Polen’s record for the most race victories in a single season, with 17 additional laps still to go tomorrow morning (early Sunday in Malaysia) at the Losail International Circuit. He also moves to within just 12 points of the highest points tally in one WorldSBK season. The 2018 MOTUL FIM Superbike World Champion was absolutely untouchable out on the Qatari circuit, getting the holeshot at the lights and never relinquishing the race lead. Teammate Tom Sykes completed a KRT one-two, with Pata Yamaha’s Alex Lowes getting the better of Eugene Laverty of Milwaukee Aprilia for 3rd position after a race-long battle.

A dream start for the Northern Irishman pushed him into first place before even arriving to Turn 1, while Laverty and Lowes jostled behind to see who could follow the Kawasaki bikes. The Aprilia’s incredible top speed on the kilometre-long straight was Laverty’s best weapon all throughout the race, using the slipstream to move into third after lap one.

With Rea managing a comfortable 2-second gap over his teammate and both riders a step above the rest in terms of consistency, all eyes were set on the Yamaha and Aprilia battle behind. Lowes moved ahead in Lap 6 but was again beaten on the front straight three laps later. It all came down to an epic last lap battle where they rubbed shoulders all the way through, including a brave final pass from the Englishman at Turn 12. Laverty tried to return the favour on the final turn but nearly lost the front end, handing Lowes the final podium position. There is a silver lining for the Aprilia rider however: he starts from P1 on tomorrow’s grid.

Xavi Fores followed the front quartet with a confident race all the way to the final lap, but late issues pushed him down to 13th to the benefit of Marco Melandri. The Italian takes 5th position and will start his last race for the Borgo Panigale squad from the front row of the grid. 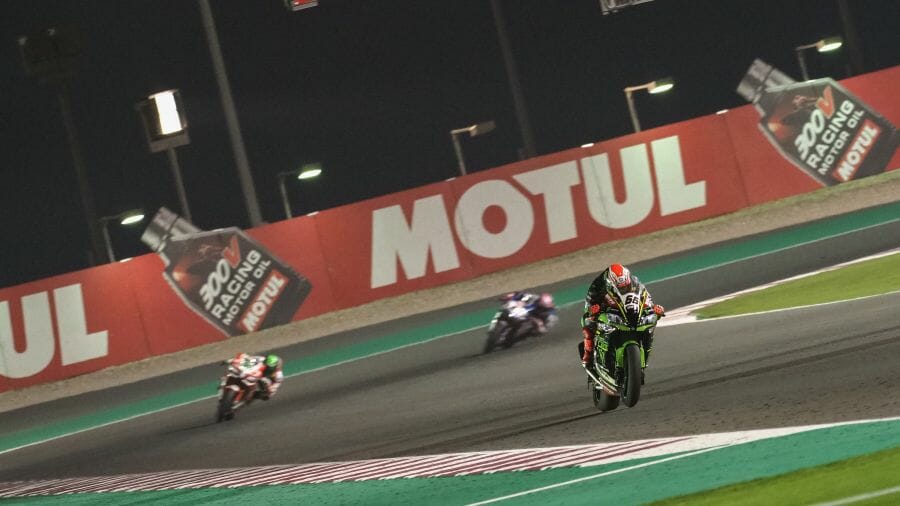 The last two laps at Losail saw one of the wildest battles of the season, as Chaz Davies, Michael van der Mark and Loris Baz raced side-by-side for that final front row spot. The Frenchman was triumphant in this war, taking sixth position with the Yamaha in seventh, while Davies nearly lost 8th position on the final straight to Jake Gagne of Red Bull Honda World Superbike Team, who finished 9th. Gagne’s teammate Briton Leon Camier, seems to follow in the footsteps of his compatriot’s reputation in MotoGP, Cal Crutchlow by crashing out of Race 1.

Toprak Razgatlioglu, riding for Kawasaki Puccetti Racing, closed the Top Ten, with Milwaukee Aprilia’s Lorenzo Savadori in a disappointing 11th after starting from the 2nd row.