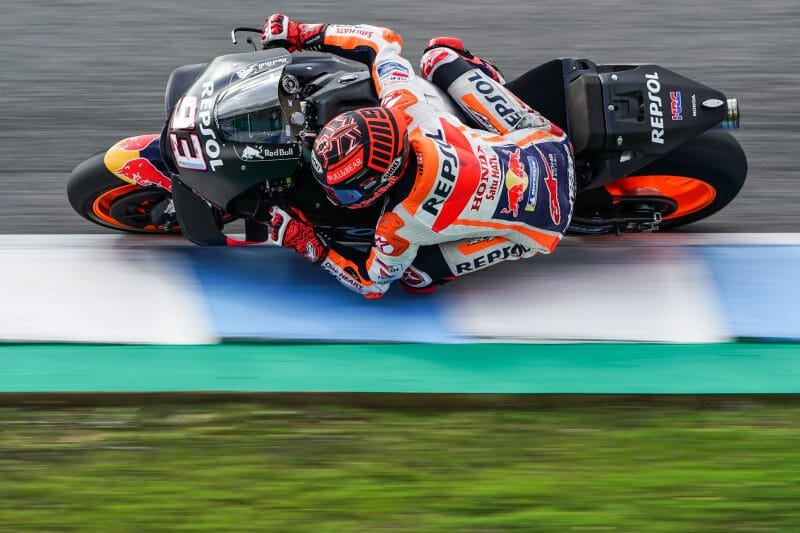 LCR Honda Idemitsu‘s Takaaki Nakagami  was impressive on Day 1 of the Official Test at the Circuito de Jerez-Angel Nieto but the Japanese rider usurped the adjective on Thursday to not only impress, but go quickest.

The Japanese rider’s 1:37.945 was unmatchable on Day 2 and he put in 66 laps on his 2018 Honda. Reigning Champion Marc Marquez of Repsol Honda Team was in close pursuit, however, ending the day just 0.025 off Nakagami’s best with a 1:37.970 – with Maverick Viñales of Yamaha Factory Racing completing the top three and still within a tenth of the top. 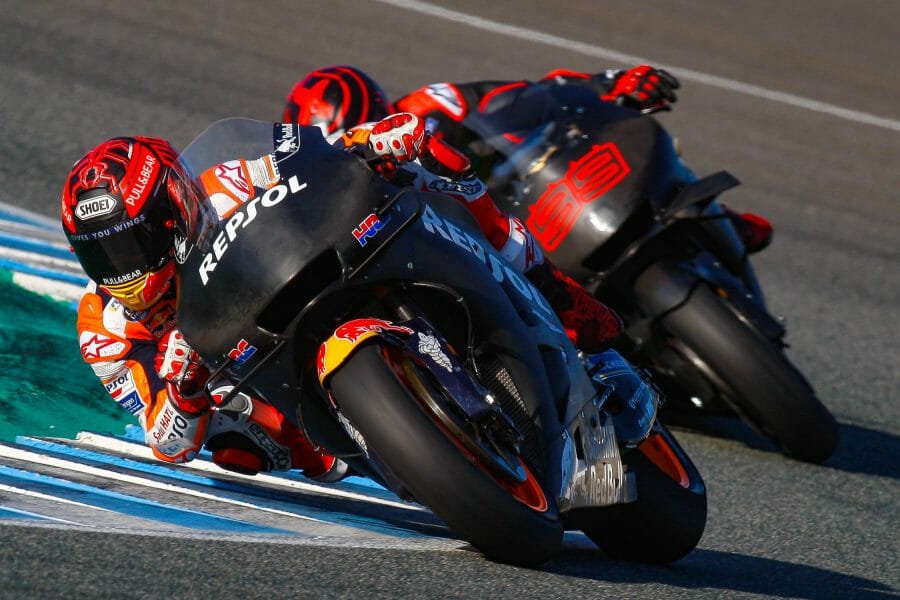 At Honda, the devil was in the details – not just the logo on the number 99’s side of the garage – although there was a new airbox on show. Marquez said he was working more on refinements, as well as different tyres, with some good and some bad to report.

Overall though it was a satisfied seven-time World Champion, happy with engine improvements. He did 56 laps – including a Marquez-style save – and says now focus will shift more towards the chassis.

New teammate Jorge Lorenzo was also a force to be reckoned with on the timesheets. He put in a 1:38.105 and was just 0.039 off Viñales in third, with the number 99’s fourth day on the Honda seeing him take P4 after 65 laps – the third Honda in the top five. 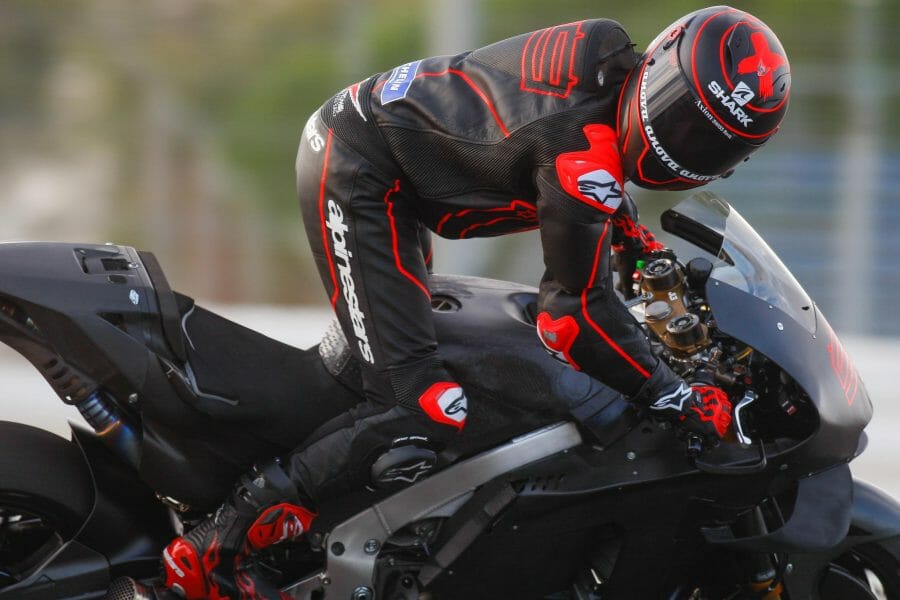 The leading Yamaha on Day 2 was Viñales after completing 78 laps, and he seems happy with the 2019 YZR-M1 so far. Both he and teammate Valentino Rossi  have been testing two different engine specs, with Viñales clear as to which one they should go with.

The Spaniard reflected after Day 2 by saying “overall we have a really competitive bike” and “the laps times were consistent.” Positive from the new number 12, but what about Rossi? 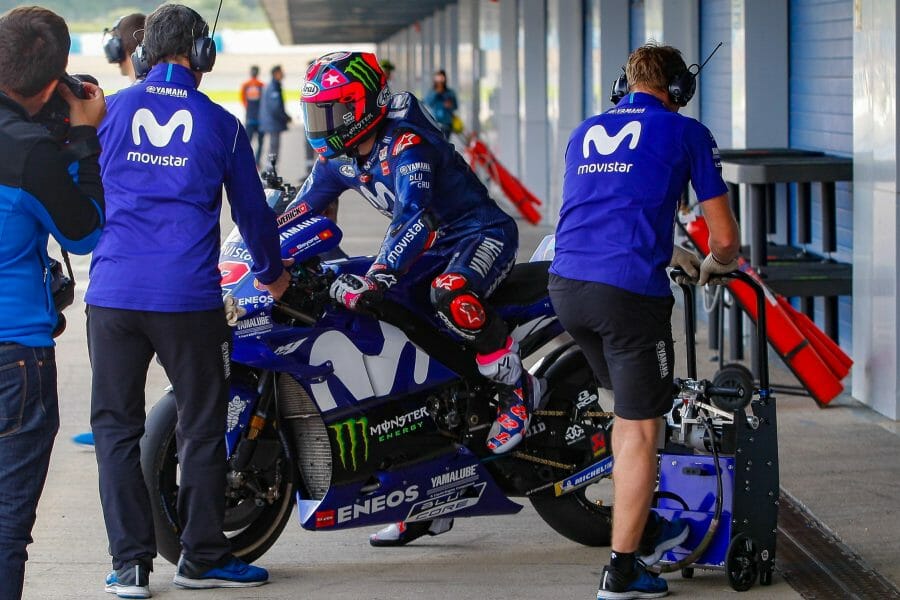 Maverick Vinales about to go out on his Yamaha M1 bike 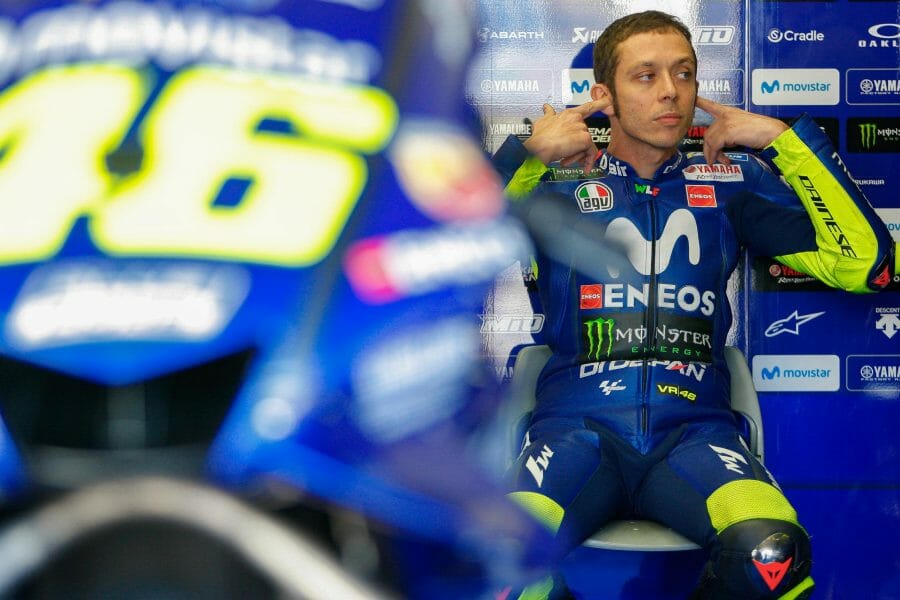 Valentino Rossi getting ready for his test

Well, while Viñales seems content, the nine-time World Champion wasn’t happy with the engines provided by Yamaha after Day 1, going as far as saying that it was good enough for fourth – if someone else crashes. On Day 2, Rossi finished 11th fastest after setting a quickest time of 1:38.596, 0.651 from Nakagami’s benchmark after completing 67 laps.

The factory pairing both agree on which spec engine they need to go for, but ‘The Doctor’ insists Yamaha need to find more if they are to challenge at the top next season.

In the Petronas Yamaha SRT garage, it was another good day for both Franco Morbidelli and rookie Fabio Quartararo. For the former, a P6 finish after 68 laps and just 0.173 from the top sees him continue his quick adaptation from Honda to Yamaha.

For Quartararo, it was another vital 58 laps in the bag – and it was another hugely positive day. The Frenchman ended P12 on the timesheets after setting a fastest lap of 1:38.761, just over a tenth off Rossi’s fastest lap and under a second from P1. 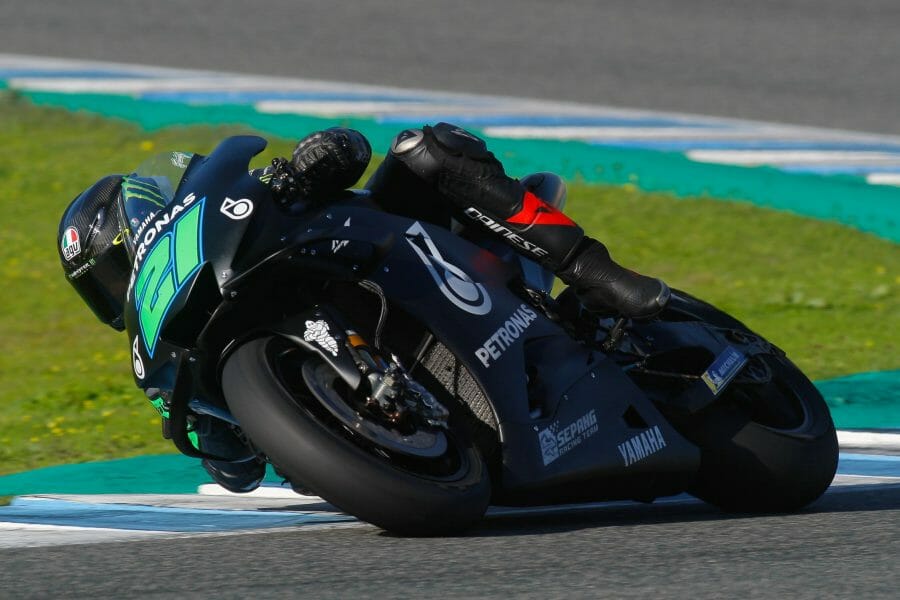 Franco Morbidelli astride his Petronas Yamaha

Meanwhile Ducati were the only manufacturer, according to Andrea Dovizioso, who weren’t on engine duty – they were confirming, successfully, their results from the Valencia test.

The Borgo Panigale factory were focused elsewhere, including some time working on a seat modification first seen on Day 1 ridden by test rider stand-in Alvaro Bautista.

Jack Miller, riding for Alma Pramac Racing, had an impressive day on track, including a lot of time spent working on different setups that “seemed to work better and better” every time they made a change. He was fastest for a brief time in the afternoon, and ended the day in P7 overall after 57 laps, the best of which was a 1:38.207.

His rookie teammate Francesco Bagnaia, meanwhile, made for close company and was the quickest of the new kids on the grid. The Pramac duo were split by Dovizioso but ‘Pecco’ was only just over a tenth off Miller and the Italian debutant did 50 laps, just working on getting experience – especially on used tyres. 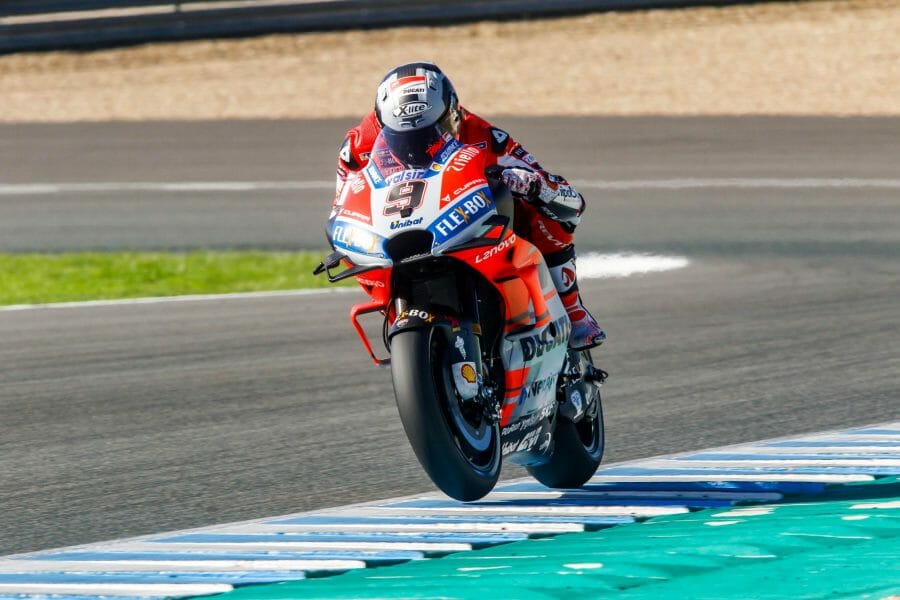 Tito Rabat was another impressive performer on Ducati machinery. The Spaniard, who is still coming back from his leg break sustained at Silverstone, managed 60 laps and ended the day in P13.

For Suzuki’s Alex Rins was able to continue to test the new GSX-RR engine and chassis combinations, alongside test rider Sylvain Guintoli. Rins was able to post the 10th quickest time on Day 2, a 1:38.522 was 0.577 off Nakagami’s pace as he completed 63 laps on Thursday.

For teammate Joan Mir, it was another 55 laps under his belt as he continues to impress, bouncing back extremely well from a fast crash on Day 1. P14 on the timesheets for the Spaniard and under a second from P1 shows the 2017 Moto3 World Champion is continuing to adapt well, as he also got to try the new Suzuki engine and chassis on Thursday. 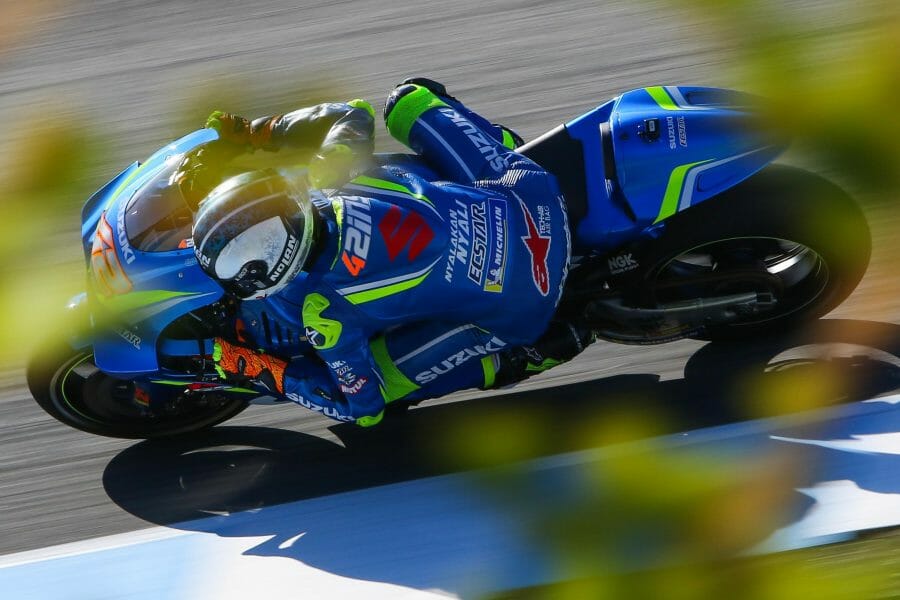 It was a tough test for Aprilia Racing Team Gresini with Aleix Espargaro missing the whole of Day 1 through illness, while also missing the morning of Day 2 to complete just 11 laps.

In addition, after a crash on Day 1, Andrea Iannone who is now with Aprilia Racing Team Gresini, was riding with an injured foot as the Italian completed 36 laps by the end of the second day to finish P18 on the timesheets.

This left new test rider Bradley Smith with the majority of the testing duties, the British rider getting 59 laps done on Thursday, with Matteo Baiocco also on circuit for the Italian factory – 48 laps completed for the latter. 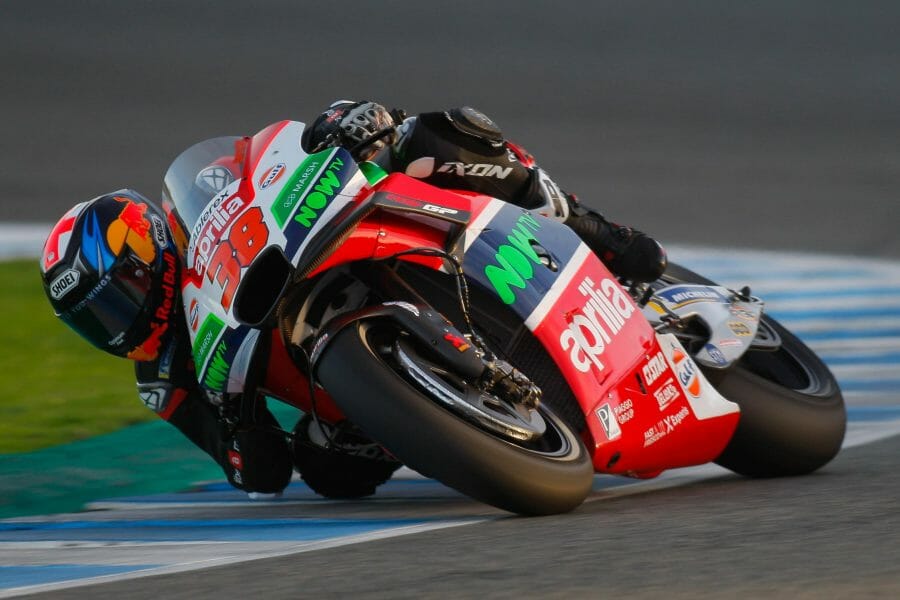 At KTM, Pol Espargaro was once again the quickest Austrian machine as the Spaniard put in a best of 1:39.144 after 60 laps – putting him fifteenth on the timesheets. Work continued on many different parts of the RC16, with Espargaro testing what Team Manager Mike Leitner called “bigger items”.

Johann Zarco, meanwhile, was getting to better grips with his switch to the machine – with Leitner confirming his adaptation to the bike and vice versa. The Frenchman was seven tenths off his teammate on Day 2.